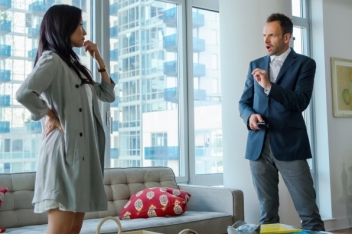 Jonny Lee Miller and Lucy Liu as Holmes and Watson

Mycroft Holmes (Rhys Ifans) tries to lure Sherlock back to London. Sherlock and Joan investigate the mystery behind the murder of a young woman.

Check out our review:

Mycroft Holmes (Rhys Ifans) returns, seeking Sherlock’s help in solving the murder of his ex-fiancee’s boyfriend. Sherlock suspects that Joan and Mycroft are hiding something from him.

Based on Arthur Conan Doyle’s story, The Silver Blaze.

Check out our review:

Life can be a bumpy ride. These are just some of my musings about the scratches, bruises and occasional wsdom I've acquired along the way. Everyone has a story, this is mine. Share yours if you want!