Yesterday we came across a river otter who crossed the road about 30 yards in front of us and disappeared into our pond. No cars were around so he needn’t have been in a hurry, but still he was very business-like, loping purposefully from one waterway to the next. He didn’t stop and give us any extra time to appreciate his company, and clearly—though we meant him no harm and regarded him with respect—he didn’t seem to appreciate ours.

Similarly, on today’s walk along a road through the neighboring wetlands, a large flock of ducks took flight, putting as much distance between us and them as possible, as quickly as possible.

Meanwhile, several pairs of Canada geese kept a wary eye on us as they 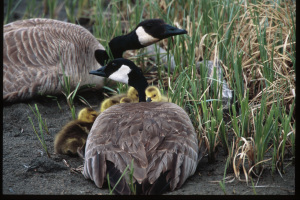